The Engineer Cantonment is an important piece of Nebraska’s history. It is the site where Major Stephen H. Long and his party of scientists wintered in 1819 and 1820. Major Long’s expedition led his team up the Missouri River on an exploratory mission to learn more about the people, land, plants and animals, as well as to expand US trade in the region. After wintering at the Cantonment, Major Long’s team travelled west to the Rockies before returning with their findings.

The Engineer Cantonment was thought to be lost for 200 years, until in 2003 Rob Bozell and Gayle Carlson of the Nebraska State Historical Society’s Archaeology staff discovered the site. Were it not for an artist named Titian Ramsay Peale, the site may have remained hidden. Archaeologists only had a rough knowledge of the location of the site, but a painting by Peale of the site in 1819-1820 led the archaeologists to some bluffs on the property. From there, a trenching machine was used to unearth buttons, beads and other items that matched the time period. In 2003 and 2004, excavation of the engineer cantonment by the NSHS were completed.

For more information, check out these articles from History Nebraska, formerly the Nebraska State Historical Society:

What is Engineer Cantonment? And why is it so cool that we found it?

“Archeological Investigations at Engineer Cantonment: Winter Quarters of the 1819-1820 Long Expedition, Eastern Nebraska” is available for purchase at the Nebraska History Museum located in Lincoln, Nebraska. 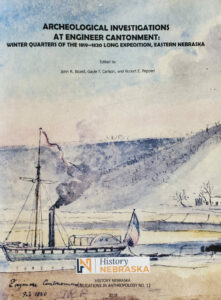 Photos from the Engineer Cantonment Dig

The Pike-Pawnee Village Site or Hill Farm Site, designated 25WTI by archaeologists, is a site near the village of Guide Rock in Webster County, Nebraska. It was the location of a village of the Kitkehahki band of the Pawnee people, in a region of the Republican River valley that they occupied intermittenly from the 1770s to the 1820s.

The property was purchased by the Foundation in 1979. The primary goal of the Foundation in making the purchase was, and is, to preserve the site and its historical and archaeological resources. The farm consists of 283 acres, comprised primarily of pasture. In 1966, two hundred acres were listed on the National Register of Historic Places, having been officially recognized as an important Pawnee community and as the site visited by Lt. Zebulon Pike in 1806 to confer with the Pawnee.